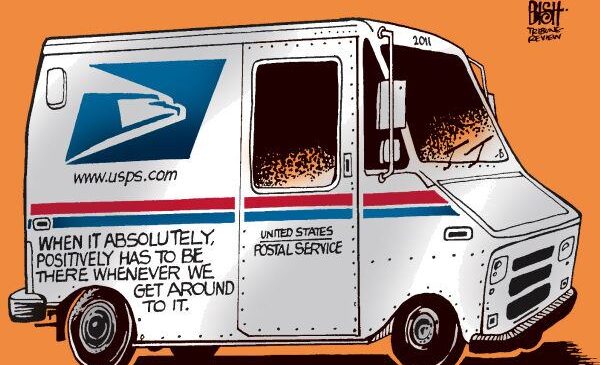 Today the mail carrier decided to outdo herself!

For the most part since the advent of Informed Delivery last year, they’ve generally been good about delivering the mail that was imaged on that day without causing too much damage to the mail or things that might be on the periphery of the the cul-de-sac.

Mind you, I still see her skip my mailbox from time to time if she doesn’t feel she can be bothered to actually make the effort to deliver that day but it happens so much less now that I’m resigned to the feeling this is probably the best that the “service” will ever get.

But that doesn’t mean that some of her current foibles aren’t rather amusing, such as:

That brings me to today’s episode of “The United States Postal Service: We Deliver Stupidity For You!”.

To be fair, the idiocy actually started somewhere in New Jersey by a shipper who couldn’t be bothered to actually note what house number would be more likely to find a Mr Pardo than mine.

That doesn’t take away my contention that this particular piece of mail should have never left Sunnybrook Station in the first instance unless the mail carrier actually knew of this person living along my street.

That’s certainly a possibility I’d allow but a casual search of the tax records for Wake County came up with a big fat blank.

Clearly, there was a bit more investigating to do…the return address buried under the top label wasn’t of much help. It looks to be a commercial warehouse in New Jersey and no contact information.

And I could understand if it was a case of me just having moved to this house. But it’s literally been 11 years since I signed the papers to buy the house on my brother Ben’s birthday in 2010 (!) and I’ve been here ever since December of that year.

I truly do sympathize for the average mail carrier…they get yelled at if mail/packages that went out on a truck come back on that same truck at the end of the route.

They get crap about their trucks having A/C (incidentally, they don’t which really sucks in the South in the summer) or heat (don’t have that either which also sucks in the winter seeing as we actually have an identifiable winter season here).

And I can’t begin to imagine how demoralising it must be to know that for the average household, 95% of what arrives at the box is junk mail that doesn’t even make it past the nearest convenient rubbish bin but you’ve still got to deliver it because were it not for the volume of junk mail, the USPS would have gone bankrupt decades ago.

But when it’s clear that whilst this particular instance of stupidity started in New Jersey, it was ably aided and abetted by probably the most annoying and lazy mail carrier I’ve ever met in my entire life and it’s kind of hard to maintain the sympathetic feelings.

I honestly wouldn’t mind seeing the two regular carriers on this route lose their bid authority on the route but I doubt that’ll ever happen.

There are no local postmasters in the branches anymore so any complaints or constructive criticism has to go through the 1-800-LOSER line and a few calls there has convinced me they’re of no use whatsoever in terms of caring about the problems much less finding a solution.

And with the current Postmaster General hell-bent on completing the destruction of the USPS that started with Congress’ idiotic 50-year prepayment of USPS retiree benefits which no other business has to do in the entire country coupled with an uber-powerful union that protects and promotes the most incompetent employees as a design feature…I don’t hold much hope of things getting better any time soon.

So I feel for this Mr Pardo whose “time sensitive” parcel is back in the clutches of the Sunnybrook Station.

I honestly tried to find you and it wouldn’t have been the first time I actually properly completed the delivery of mail that should never have been misdirected in the first instance.