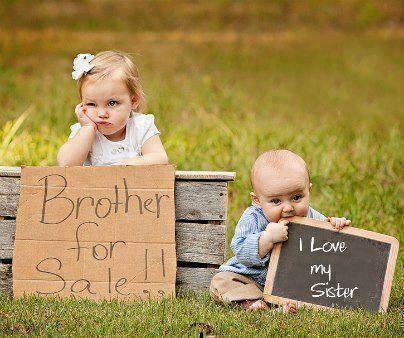 A few weeks ago, I spoke of a sister that I had never known other than by very rare mentions after watching a streamed performance of the play “Still. Birth.” co-written by Robyne Parrish who at one point was the boss of the sister I’m writing to you about tonight.

That of course is my sister Meghann who celebrates her birthday today and who I wish to have many happy returns of the day. I’ll be nice and keep the number of years to myself…she deserves at least a little nice from time to time when Ben and I usually tend to drive her to distraction. 🙂

The funny thing is that I was asking for her well before she graced us with her presence when Marty McFly was piloting Doc Brown’s DeLorean! 😉

I forget how old I was but I couldn’t have been more than four or five years old when Mom took me with her sometime in the autumn to Fayetteville Technical Institute where she was studying and I met a rather tall gent for the very first time.

Mind you, at that age (and frankly ever since)…many people would seem tall to me but Lee was truly impressive and had a ready smile which was not something I was particularly well acquainted with given what was happening on the home front.

Somehow the conversation turned toward the rapidly approaching festive season and he asked me what I wanted for Christmas.

That’s when I looked him straight in the eye and asked him for a sister.

The ground couldn’t open up quick enough and swallow my poor mother whole and transport her through the Earth’s core to China. Her look was a combination of shock and horror and she seemed to be racking her brains to find any graceful way out of this situation.

Lee didn’t miss a beat and tried explaining that sisters take a bit longer than a couple of months to come one’s way…something on the order of nine months.

I distinctly remember doing the math in my head and telling him “that’s OK, my birthday’s in May!”

Now they’re both blushing so furiously that the colour red was getting seriously jealous and are wondering how in the hell they’re going to get out of this one.

What I didn’t know at the time was that Lee and my mother would eventually marry after her divorce from my father was finalised. But there was always a sense from the very first moment I met him that he’d be a very important part of my life in the future and that meant in my juvenile mind “get on with it and get me a sister, dammit!”

A while after they were married on the day before my birthday in 1978, they told me over the phone that a baby brother or sister was on the way and this kid stationed with his father at Ft Leavenworth couldn’t have been happier.

Unfortunately, the bad news came soon afterward that was not the pregnancy that would result in my brother being born and that was a very tough pill to swallow after getting so excited about having a sibling after all that time.

But it wouldn’t be that long before the next attempt which would be my brother who was born in 1981 whilst I was living at Ft Sam Houston in Texas. Even though he wasn’t the sister I asked for many years prior, I still was excited that I finally had a brother to call my own. (In a manner of confession, that was when I really learnt that “having isn’t such a good thing as wanting” really is true when that same brother would pester me whilst I was living with my mother when Dad was stationed in Germany…but that’s another story for another day!)

A while after that whilst with Dad in his final posting in Jackson MS, I got the news that my sister was finally on the way. Mind you, that news also came with dire warnings of what the advent of the first girl born to either side of the family in decades portended but truth be told I could have cared less.

The sister I’d asked for over a decade earlier had finally arrived safely and the first time I saw her that December, she had me by the heart strings immediately and has never let go since.

Don’t get me wrong, I love my brother dearly.

But if you see the three of us together, you can definitely tell which side of the family he favoured with height and the not-so-Hungarian look. Honestly, if we hadn’t ever seen Lee, we’d have wondered if he was dropped off by the delivery guy or aliens (with the delivery guy being the more likely candidate…they were kinda dodgy looking!).

So today’s my sister’s special day and I’m thrilled that I’ve managed to see another one and hope to see many more.

She has the heart and soul of an artist and the stubbornness she’s earned in her genetics many times over that ensures that she won’t give up or quit until whatever job she’s working on is done to her satisfaction.

She is my sister and that makes her special to me in ways I cannot begin to count.

After all, I waited long enough for her… 🙂