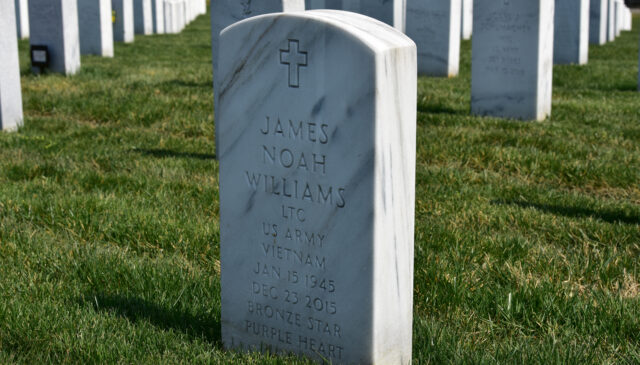 Yeah, it came faster than I’d have ever imagined and it’s why I’ve been a bit unsettled this past week or so.

After all, that was supposed to be the length of the original voyages of the USS Enterprise on “Star Trek” for Pete’s sake!

That’s how long “Babylon 5” ran on TV in the 1990s to complete one of the most epic planned story arcs in a series unlike any that had come before it.

Funny…it still seems like yesterday that we were all gathering at the Old Post Chapel at Ft Myer and meeting with the chaplain who would be leading Dad’s funeral service.

We had waited nine months almost to the day from when he passed away until the time we could finally give him a proper send-off befitting his service to his country. It took five months just to get to choose from amongst three days that were offered by Arlington knowing full well that if we passed on them, it’d probably be another five months before we’d hear from them again.

They perform about 25 funerals per day on average. Just think about that…about 7,000 burials per year and the demand shows no sign of slowing down.

Every anniversary since is a day of remembrance and of love that Dad’s final gift to us all was to be an integral part of our nation’s history.

That service at the Old Post Chapel changed me in ways that I am *STILL* discovering to this day five years later. I can’t imagine how anyone could attend a funeral at Arlington and not be irrevocably changed to the core of their very being.

Arlington National Cemetery is a sacred place. Arguably, I think it’s probably *THE* most sacred and hallowed ground you’ll find in this country. And knowing that there is a small bit of Section 76 which is as much a part of the fabric of this country’s history as it is indelibly ingrained upon our hearts and for those that will come after us for generations is something that still takes getting a bit used to even after this time.

Long after we’re gone, Presidents and other dignitaries will still visit Arlington from time to time whether it’s laying a wreath at the Tomb of the Unknown Soldier or attending a funeral for someone who earned their place of eternal rest.

Other families will come and lay their loved ones to rest as we did that day.

And many more will visit the cemetery as part of their visit to Washington DC.

I sincerely hope that when they do, it will mean as much to them and be as transformative in their lives as that day five years ago was in mine and those whom I love and cherish more than anything.

I’ve had the privilege of visiting his place twice since the funeral. And each time I’ve left with a sense of peace and the hope for better days to come.

I have no idea when I’ll be able to stop by and just enjoy the peace of sitting next to his marker and take in the sights and the sounds of everything nearby.

But truth be told, I can’t wait for that next visit to come if for no other reason than to be as close to him as I can get on this earth and be comforted by his presence remembering the best of times we had together.