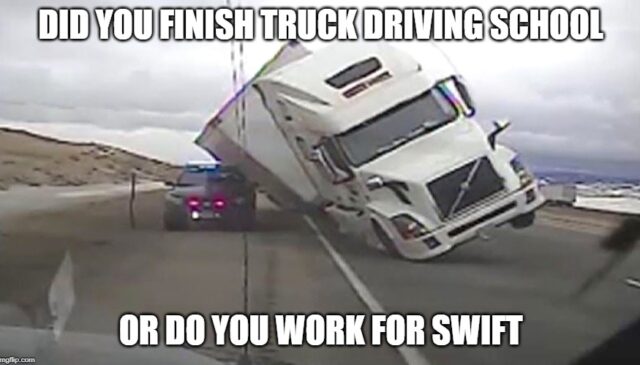 Some days, you really ought to just stay in bed!

Perhaps it’s the lingering after-effects of the recent full moon which tends to bring out the crazies but today was full of completely mad buggers thinking that driving should be equivalent to “take out my Traverse in the most spectacular ways possible”.

I should have known that driving was going to royally suck when the approach to Enloe on a lane that is normally two lanes was trying to accommodate the usual traffic as well as people parking in the conspicuously posted “no parking zones” on both sides.

And that’s not even talking about the migration of the students, the volume and general consciousness level would rival any zombie apocalypse you’d care to name!

Two different vehicles tried their level best to collide head-on before I made it to the safety (relatively speaking) of the entrance near the baseball field.

Then on the way to WakeMed to drop off Katie and Alex and Mistletoe, it wasn’t enough that my driveway at the end of a cul-de-sac was at least three-quarters blocked making the departure far more interesting than it needed to be but then I have to take evasive action halfway up the street to avoid someone backing out of their driveway and apparently trusting their abilities with The Force far more than they really ought to.

But my favourite had to be the driver of the mobile CT/MRI 18-wheeler near WakeMed. One illegal left turn onto Sunnybrook from the outer turn lane into the leftmost southbound lane wasn’t enough for this guy.

As I’m sitting in the centre turn lane with my signal showing a left turn into the medical office car park, he drifts back into the outer lane and then cuts left all the way across and darned near destroys the entire right side of my Traverse. Were it not for leaning on the horn as hard as I could, he probably would have which could have been a real bad day for Alex and Katie.

As it was, he stopped halfway through his turn and now I can’t see anything so I have to complete the left turn in the blind which was even more scary than this guy who almost took out my vehicle.

If you’ve ever seen the northbound traffic approaching the New Bern Ave intersection, you’ll know they tend to give their car the beans and leave the braking until very late thinking they’re piloting a Formula 1 car!

Fortunately, the driver was still deploying the stairs for the truck near the building after I had successfully transferred the kids and the puppy.

He said he supposedly saw me in the turn lane but when I pointed out to him that it didn’t stop his illegal left turn until after I laid on the horn enough to make a New Yorker proud, he decided to go for another line of defence:

“I’d be waiting there for twenty minutes if I didn’t make that turn that way!”

I honestly couldn’t believe I heard this guy say something that breathtakingly stupid…stupidity so epic that I literally had to stand in awe in its presence for about thirty seconds before finally having the presence to mind to strongly suggest to him that waiting the supposed twenty minutes and everyone makes it home safely sure beats time in prison for causing a collision and potentially injuring or killing the other parties!

I will give this guy credit and it’s the only thing that kept me from taking his tag and reporting this to his employer…it was at this point he did the one intelligent thing he did during the entire encounter.

He chose to shut his mouth and keep it shut.