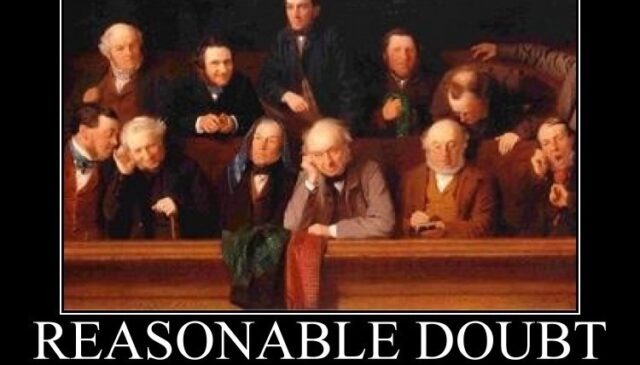 This post is my take on the recent verdict returned by the jury in Kenosha where Kyle Rittenhouse was acquitted of all charges against him.

Before I get into my opinion on this subject, I did a deep-dive on juries in general looking at a very brief history of how they came to be and a detailed discussion on trials by jury as practiced in America. It’s a long read but it was well worth writing because as much as we in America would like to think our system is justice is more fair than the others throughout the world, there are places where improvements could be made and that was the whole point of exploring where juries came from and how they’ve evolved through the centuries. You may want to read that posting as background before diving into this specific case to understand the basis for some of my opinions presented herein.

That being said, I’d like to start by offering a link to LegalEagle’s YouTube video where he goes into the specifics of the Rittenhouse case and the verdict and is well worth watching. There’s a couple of points he doesn’t address in the video that I’ll offer here but by and large I think it’s a reasonable analysis of the jury verdict and would be useful for those who haven’t followed the case closely.

Now, on to the opinion and I’ll start by stating for the record that I accept the jury’s verdict based on reading the instructions on the law that they were obliged to follow in their deliberations (this document is embedded at the bottom of the page for your reference) and I can understand how the jury came to their verdict based on the evidence and testimony offered at trial.

I don’t *AGREE* with some of the aspects of Wisconsin’s laws that were at issue in this particular case but as I discuss in the deep-dive, the duty of the jury is to weigh the evidence and testimony against the law as instructed by the judge/court and render a fair and impartial verdict whether or not they actually agree with the law.

Based on the videos where Rittenhouse shoots Rosenbaum, Huber, and Grosskreuz and the specific definitions of self-defence and no duty to retreat in the jury’s instructions, I can understand how they could see that Rittenhouse was trying to evade various attacks (mostly unsuccessfully) and found himself in situations where he would have felt the need to use the gun to defend himself. With Wisconsin’s laws on these two issues, I think getting convictions on the first-degree intentional homicide charges were probably wishful thinking by the prosecution.

Where Rittenhouse’s conduct becomes far more problematic for me is the issue of provocation discussed on p 3-4 of the jury instructions.

I would respectfully suggest that a 17 year-old wandering about armed with a semi-automatic firearm is provocative by nature with and brandishing it as he did in the several videos with the attitude reminiscent of Rambo or Dirty Harry is not going to end well.

Rittenhouse and other witnesses contend that they were asked to defend a car dealership against vandalism and looting as a result of the general unrest and rioting in Kenosha after the police shooting of Jacob Blake earlier. The owners of the car dealerships say they didn’t ask for anyone to defend their lots so it’s up to you as to who you believe.

Regardless of whether Rittenhouse and his colleagues were invited to be a posse to protect the car dealerships, a 17 year-old truly had no business acting as if they were armed security filling the perceived vacuum of authority by the police or other authorities not having control of the situation.

He was not a sworn law enforcement officer or member of the National Guard. He was not licenced to be or employed as an armed security guard. And whilst he might have participated in a police explorer programme, that does not come close to the training or emotional and mental maturity required of law enforcement to deal with situations of general unrest in a reasonable way to preserve the peace.

And that’s where the bit on p 4 comes into play for me: “he reasonably believes he has exhausted every other reasonable means to escape from or otherwise avoid death or great bodily harm”.

IMO, he hadn’t exhausted every reasonable means when he took the decision to arm himself and go out into a state of general unrest and disorder which he was not properly equipped or authorised by law to deal with.

I accept that he believed that he was invited to secure and defend the property but the more mature decision would have been to stay at that house in Kenosha rather than go out like some sort of armed member of a militia with a feeling of invincibility and the enthusiasm of youth.

If the riot came down his street and he felt the need to try to defend that house against attack, that would have been a very different proposition where self-defence and the Castle doctrine would have been appropriate.

But that’s not what I think ultimately happened here. I think he let his irrational desire to be some sort of hero filling the void left by the authorities to defend property cloud his judgment and he went out not necessarily looking for a fight but putting all of the elements into play that made what happened afterward inevitable.

And this is where it gets really tough because the instructions on the law on determining whether his beliefs were reasonable on p 3 allow for a belief to be considered reasonable even if mistaken.

Rittenhouse believed himself invited to protect the property of others and capable of competently doing so when armed with that AR-15.

With the benefit of hindsight, he was mistaken. Deadly wrong, in fact.

But the instructions don’t give the jury the means to convict him due to his mistaken teenage beliefs. They have to consider self-defence in each incident during Rittenhouse’s interactions with the people he encountered separately and not armchair quarterback his decision making process prior to the encounters ex post facto.

Were I on that jury, I could see the interpretation of the video against the law as provided as a reasonable assertion of self-defence. Yes, he killed two people and grievously injured a third and even though I think someone brandishing a gun is a provocative act, when Rittenhouse was on the run trying to escape the consequences of his actions and failed to successfully evade his pursuers, I can see the self-defence aspects in that instant.

With that in mind, even though I wouldn’t have been able to convict on the counts of homicide, I do believe I would have argued in the jury deliberations in favour of convicting on the two counts on recklessly endangering safety of McGinnis and the unknown person (and honestly, everyone else he encountered and shot could have warranted this charge as well).

I believe Rittenhouse ticked all of the boxes on those charges where the toughest element on p 7 would be the one about the defendant’s awareness that his conduct created the unreasonable and substantial risk of death or great bodily harm.

I can’t claim special awareness of what his thought process was at the time but from the testimony, I think he did honestly believe he was doing the right thing by his actions of leaving that house armed with a weapon with all of the maturity that a 17 year-old can bring to a decision of that magnitude which science assures us is nowhere near what a reasonable adult would conclude based on the neural pathways are still developing until a person is in their 20’s.

And then we’re back to the problems of beliefs being considered reasonable under the law even when mistaken and if we’re consistent in applying that here as we did in the counts of homicide…I can see how the jury felt they couldn’t convict him on these counts as well.

Unfortunately, the jury wasn’t offered the opportunity in the instructions given them to deal with a glaring and alarming loophole in Wisconsin’s gun laws…to wit the fact that a 17 year-old Rittenhouse could go wandering about Kenosha armed with a weapon he could use to kill and maim based on a technicality about the weapon’s length but that he could not legally purchase in Wisconsin. I think Dominick Black is going to have a real problem on his hands dealing with the charges against him for supplying the weapon that Rittenhouse ultimately used.

Logically, one would think that if you’re not permitted to BUY a gun in Wisconsin, you ought to also be prohibited from CARRYING and USING it as well. I would hope that the people in the legislature in Madison fix that loophole the size of the USS Nimitz quickly.

The other thing I’ve seen online and in news commentary is the vilification of the men who were shot by Rittenhouse. Yes, all three of them certainly had a chequered past in terms of prior run-ins with the law (and Grosskreuz is apparently still running afoul of the law with a recent DWI charge) but certain outlets are trying to establish the narrative that they had no business being in the middle of the riot either and that their past behaviour implies that they got what was coming to them.

But one’s past should have nothing to do with what happens when one person encounters another on the street. Were their past indiscretions truly worth being wounded or killed? And since when do we condone armed individuals acting as a vigilante judge, jury, and executioner in a supposedly civilised society?

We can never and will never know anything other than Kyle Rittenhouse killed two men and wounded a third that night in Kenosha and he will have to live with those memories forever regardless of the jury’s verdict. That mental stress alone is probably a far worse punishment than incarceration ever would be.

I do think the argument could be made that this case may be a rallying cry for those who would act as vigilantes outside the aegis of law in instances where they believe that legitimate law enforcement and security agencies have abdicated their responsibilities.

But the jury isn’t allowed to consider these larger societal effects that their verdict may engender…lawfully they may only consider the evidence as given and accepted in court and the instructions on the law as citizens who may not necessarily be learned in the law.

Based on reading the instructions to the jury and my understanding of the evidence and testimony, I have to reluctantly conclude that in this instance this jury did just that and accept their verdict as appropriate in this case even if the larger implications are somewhat distasteful and worrying.