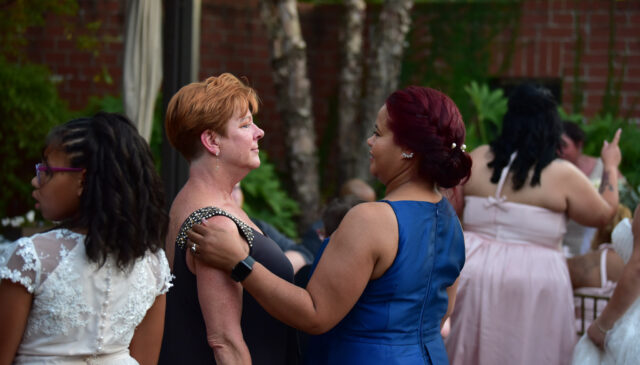 Is it too late to give December a miss and go straightaway to the New Year? Between Darth RUUD acting weird, the Traverse practically blowing up on the motorway and watching a friend walking through the dark empty places from afar, it really has tried what passes for my patience when it comes to this festive season.

Mind you, I’ve experienced worse almost six years ago but that was not intended to be a challenge to December to go for full-on dreadful.

Been there, done that.

And yet a few days ago, December seemed to be doing exactly that when we received the very unwelcome news that our friend Valeri Sienkwicz had passed away quite unexpectedly over the weekend.

I first met Ms Val as I’ve met a lot of people since moving into this house many years ago: by hanging out for some sort of gathering at the far more socially happening home next door with Miguel and Jessica and family!

I was at one of these gatherings which usually involves enough food to overwhelm even the hungriest army, a cake that will be smeared on the honoured attendee at some point, and generally a very festive atmosphere with lots of music and general merriment and more than a little coming and going through the front door.

If you listen to music long enough and you tend to play your instruments by ear, you’ll get very good at identifying subtle differences in sound that other people just won’t hear (and half the time won’t believe you can hear it either).

When I worked at Blue Cross as a contractor, my first cubicle was right next to the VP’s office (no pressure, right?). The VP at the time was from the United Kingdom which thanks to growing up with the BBC, I’m very familiar of the differences between the Geordies (Newcastle) and the Scousers (Liverpool), I can actually understand the Jocks (Scots) as much as anyone truly can, and usually can tell which end of London one hails from after only a couple of minutes of conversation. Our friends from round Manchester can also have quite the variation of sound depending on which side of Old Trafford they’re from.

So for six months, I’m listening to Graeme and finally work up the nerve to ask him where he’s from originally. He asked me where I imagined he was from and I told him that “you’ve got the touch of Lancashire about you and I’d imagine that you’re a bit more of a Burnley fan than of Blackburn Rovers”.

The look of shock on his face was priceless!

His village was about halfway between those two towns and a bit closer to Burnley along the M65 motorway.

The reason I mention this is that I heard Ms Val before I actually saw her come from the front of the house into the kitchen and she initially threw me for a loop with her accent.

Oh, certainly you could hear that there was a fair bit of time spent in Boston about her but what was a bit confusing at the time was that I could very clearly hear a fair bit of a very distinctive New Jersey accent there as well.

My mother and a fair heap of her family hailed from the “Oil and Petrochemical State”…even though I’ve never lived there, I am familiar with the various accents round that lovely bit of Parkway and Turnpike between Delaware and NYC. 🙂

Forget what you’ve seen on TV on “The Jersey Shore”…that was pretty much a bunch of New Yorkers with the token New Jersey native. And they didn’t sound anything like what you’d expect in the northern end of New Jersey near the city (think J Michael Straczynski, Kevin Smith, and Jason Mewes) and as they were hell and gone from Philadelphia, they didn’t sound like the people in the south of the state either. There is a middle ground near New Brunswick that sounds kind of like a mishmash of both at times.

But Valeri had something I’d not heard in a long, long time…the occasional bits of a New Jersey accent from probably the most beautiful part of the state that isn’t sitting round my Uncle Pete’s lighthouse in Cape May…that lovely *GREEN* bit full of trees west of Passaic and Paterson to the Pennsylvania border in the far northwest part of the state.

Someone able to rock both of these diametrically opposed accents was someone I just *HAD* to get to know better and I’m glad that I did.

Valeri was one of those very charismatic people you don’t tend to meet very often but when you do, you treasure them greatly because they’re not only the life of the party but its heart and soul as well. She had such an unabashed and outsized personality that you just couldn’t help but to stand back in awe and just be amazed at how ebullient she could be.

And even on the days where it was obvious something was vexing her, it was like the passing cloud on a sunny day and the next thing you know she’d be back into that “ain’t nuthin’ bothering me” mode and making the best of her day.

In a lot of ways, she and I were polar opposites in terms of personality but that didn’t seem to matter to her in the slightest…we’d always have such lovely conversations that even if I’d gotten horrible news earlier in the day, I couldn’t help but feel at least a little better after being round that dazzling smile and laughing spirit for a little bit.

I think of all of the things Val brought to my life in the years since that first fateful meeting so long ago, I’ll probably miss that the most.

That’s the thing about the ones who are Fire and Air in the core of their souls…they tend to burn very brightly but they also tend to leave us far sooner than we would ever wish them to.

But as long as we keep the flame of their memory alive in our heart and soul, the best part of them is never truly parted from us.

May you rest in peace and may the family find solace and grace in the many happy memories of your brief time amongst us. 🙂