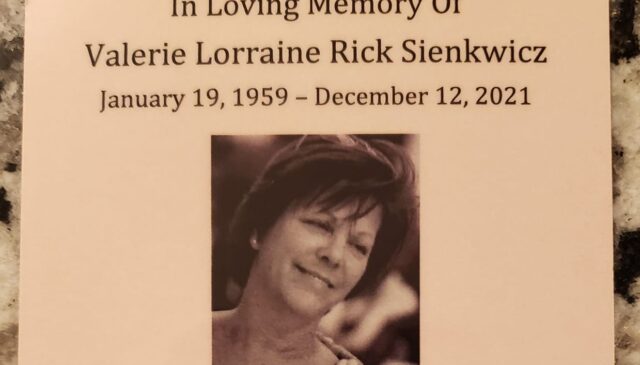 This afternoon was Val’s memorial service and I dare say it was one she really would have liked. OK, truth be told…she’d preferred being in the audience far more than being than the guest of honour!

“They say such nice things about people at their funerals that it makes me sad to realize that I’m going to miss mine by just a few days.”

The music that was playing when I came through the doors was definitely soothing. Perhaps I’m a bit biased considering that I’ve played the flute and piano in the past but it was a nice gentle modern melody and I think it set the tone perfectly for what was to come.

After sitting down, I couldn’t help but notice that they had found a lovely picture of Val that I think captured the very essence of her personality and spirit. I’ll admit to a bit of professional jealousy because of all of the events we’d been at together where I had a camera in hand, the best one I’d captured of her was nowhere near as good as this one.

The way she’s leaning her head with that smile that was a prophecy that you’d be smiling soon enough yourself. But it was her eyes that really caught my attention…in that one image, the lucky photographer managed to capture the essence of her joie de vivre (“exuberant joy of life”) with the hint of mischief and mirth that was her hallmark.

As I had mentioned earlier, I had heard Val’s voice well before I actually saw her come round the corner into view. And as intriguing as finding out her story and how she was rocking some New Jersey I’d not heard in decades would be, it was her eyes that truly captivated me from the start.

They say that the eyes are the windows to the soul and I believe that wholeheartedly. It’s amazing what you can divine about a person just by looking at their eyes which is often the first thing someone will notice about a person unfamiliar to them.

Hers were proclaiming as loud as possibly could be that here is someone who has seen and experienced much but no matter what it may have been or how sad it could be, she was going to see her world in terms of joy and happiness and bring that to everyone she’d meet.

That’s a rare enough combination in a world that seems to be embracing darkness more and more as the years go by. She certainly didn’t let that stop her from trying to bring forth as much light as she could in the service of others.

“Life is a great big canvas; throw all the paint on it you can.”

The rest of the service bore witness to just how much of a servant leader she was in life and an example for us all now more than ever.

The stories and songs spoke to her heart and generosity of spirit that will be sorely missed for those whose needs she ministered to and served and for those who had the honour of calling her friend or family…or both.

And even though the audience experiencing her memorial live was an impressive size, it pales compared to number of lives that she touched in one way or another.

Yes, I will miss her spirit and radiant joy for the rest of my days for we are forever diminished when such a one leaves us. But as long as her memories are in my heart, the most important aspects of who she was is never truly gone from us.

“I’m always relieved when someone is delivering a eulogy and I realize that I’m listening to it.”

A couple of moments during the service really stood out for me as examples of Val’s sense of humour in action that apparently not even a command performance before the Almighty can prevent.

When someone with her outsized personality that has so profoundly affected our lives leaves us, we’re all going to confront that reality in different ways. Some of us have had more than a little experience at this but I can assure you that however outwardly composed you might think we are, we’re crying and howling at the moon on the inside.

Then there was the young lady next to me who it was clear that Val had truly had an amazing impact on her life and the tears some of us were too stubborn to allow ourselves were flowing freely for her. I was about two seconds from turning to her and offering what comfort I could but Ms Ashley got to her first.

That’s probably for the best because I was wracking what passes for my brains for any ideas of what I could try to do for her and the only thing I could think of was doing a Chelsea fan’s rendition of that famous song the Liverpool fans sing at Anfield right before the kickoff of their football match.

When it came time for the stories and the tributes from the audience, her cousin from Chicago had a lovely speech about her family life and gatherings and the part that really caught my attention was when he was mentioning that growing up, Val and her sister Vicki were “inseparable and interchangeable”.

Toward the end of his remarks, he actually proved that point conclusively when he mixed up their names and said “Vicki” instead.

Friends, let me tell you…that was the toughest part of the service for me because it took everything in my power to not actually laugh out loud. As it was, my irreverent aspiring filmmaker’s thoughts immediately turned to “it’s OK, we’ll fix the audio in post-production!”.

I’ll confess that after the service was done, I did take the mickey a little with him and we had a jolly laugh about it as well as his delight that there was someone else in this world who knew of the Barnegat Lighthouse in New Jersey (kind of hard not to for me…my Uncle Pete worked the Cape May and Sandy Hook lighthouses many years before…old Barney’s about halfway between them on the Parkway!).

I think Val would have been laughing and enjoying the moment. 🙂