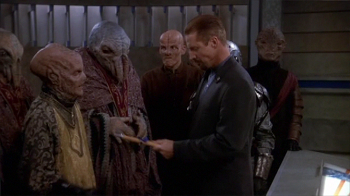 2020 has been a brutal year and this election has certainly had more than a little to contribute to the strife and anguish and division we are all feeling. COVID-19 is bad enough but eventually we will find a vaccine for it and life will return to some semblance of normal.

But the intense hatred and violence and threats of more to come? Our society has survived more than a few crises for almost 250 years but one wonders if there is a tipping point at the abyss from which there is no return.

I rather hope we never find it because I truly believe our world will not survive that descent into terminal madness.

And so no matter what happens today…this is my hope for tomorrow that each and every one of us commit themselves to a very simple proposition “that we must be kind to one another” which has been the hallmark of what it truly means to be an American through the years.

That’s probably the most important line from Citizen G’Kar’s “Declaration of Principles” for the nascent Interstellar Alliance formed in the fifth season of “Babylon 5″…if you discount the repeated admonition that “we are one”, that is! 🙂

Kindness to one another transcends the petty politics and issues of the day that would seek to divide us in a time where we need to be strongly united against the true evils in this world looking to destroy us.

Kindness doesn’t mean that you can’t continue to advocate for that which you believe but it does require you to try respect that their experiences and point of view may have led them to a different conclusion and differences of opinion are to be expected in a society of 330M+ individuals.

Kindness doesn’t mean having to accept in your life people who racist or some sort of phobe or whatever deal-breaker they may be into…sometimes the kinder thing to do is to peacefully let them go and hope they will one day see things in a different and more positive way. And if that doesn’t work, then sometimes the best form of love is “tough love” and standing your ground and defending the line that cannot be crossed.

Kindness means that even if the election doesn’t go exactly as one hopes that we can accept that democracy is imperfect and that we will lose from time to time as an inspiration to work harder the next day to educate and advise those we may oppose so that we may eventually prevail in a peaceful and respectful way.

I’ve got more than a few friends and acquaintances who will probably vote differently than I did. And that’s OK by me…I’ll admit that sometimes the reasons and justifications I’ve been given are more than a little baffling when it comes to one particular candidate but at the end of the day, it’s their choice and their reason and my default position has to be that they are taking their decision with the same sincerity and intent for a positive outcome that I’ve taken for mine.

At the end of the day, the best I can do is respectfully put my arguments out there and either carry the day and change minds or just maybe I might learn something I didn’t know which will change my opinion.

If you were my friend before this election…you’re still my friend now whichever way you vote. Likewise, if you’re into racism or something else I refuse to countenance…you’ve my permission to turn round and leave.

Because “we are one” and kindness demands no less. 🙂

“Declaration of Principles of the Interstellar Alliance”

The Universe speaks in many languages, but only one voice.
The language is not Narn or Human or Centauri or Gaim or Minbari.

That we must be kind to one another.

Because each voice enriches us and ennobles us,
And each voice lost diminishes us.
We are the voice of the universe, the soul of creation,
The fire that will light the way to a better future.