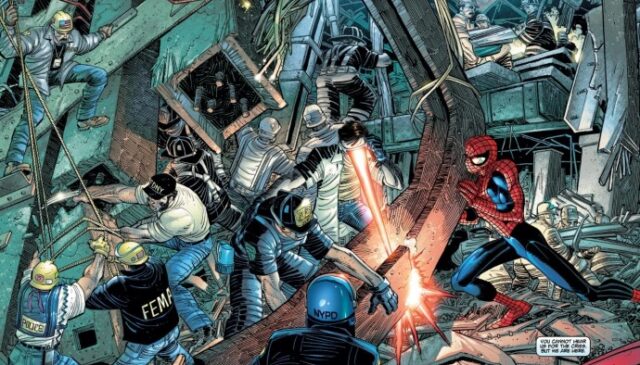 It’s shocking to try to come to grips with one of the darkest days in contemporary American history was twenty years ago today.

We were always taught that time is a linear thing ever moving forward and yet the memory of those terrible events are as fresh as the day their horror were unleashed upon a world that would be forever changed.

The memories of that nightmarish day have been just as fresh for all the previous years in between.

We would be forever changed in ways we’d never imagined.

Yes, I remember that day vividly as we were working at our little office just off Franklin Street in Chapel Hill.

The day had started off as it normally did every day before…a very early commute into The Hill to avoid the nasty traffic on I-40 and have some peace to attend to things before everyone else turned up and the normal hustle and bustle of a programmer’s life would begin. OK, that’d mainly be interminable meetings interrupting valuable coding time where I could actually be creative and do what I truly loved doing…solving problems.

As I’m waiting for the code editor and the rest of the tools to start spooling up, I’m casually scanning the headlines to see what of interest may have happened overnight. Once again, it was pretty much a case of “nothing much interesting” as I turned my attention to a bug that had been vexing me the entirety of the previous day which occupies my sole attention for the next two hours.

More co-workers turned up and went through their morning routines. By this point, we’re approaching 0900 which is when management has finally turned up and are ready to accomplish their usual achievement they called “working” by insisting on hearing your status in a meeting which was often a matter of trying to figure out the most diplomatic phrasing for “well, I was very productive until just this moment!”.

Yeah, managing programmers has been likened to herding cats for good reason. Really prickly cats who don’t exactly like being disturbed when they’re in a productive “flow”, that is. 😉

It was a couple of minutes after 0846 when the first news flashes started coming across our web browsers that a plane had crashed into one of the Twin Towers of the World Trade Centre.

At this point, none of us imagined that it was a deliberate and coordinated attack upon our nation that was in progress.

After all, who would imagine such a thing? Anyone who knows the NYC airspace knows that it’s congested at the best of times and planes have been known to fly into the buildings in Manhattan from time to time.

When the second plane struck the South Tower at 0903 and we saw the footage of the impact very soon after, that was when it became patently clear that this wasn’t a stray Cessna pilot who had lost their way in that busy airspace.

This was a deliberate act of evil and we were watching it unfold before our very eyes in near real-time.

Any pretense of continuing working went out the window as we gathered in the conference room to watch the coverage of the unfolding events on CNN.

When they showed the clip of President Bush being hustled out of the classroom by the Secret Service, any doubts we might have had about what was happening were long gone. Flight 77 hitting the Pentagon and the crashing of Flight 93 in Pennsylvania and the subsequent complete shutdown of the national airspace (which had never happened before!) were the cherries on the top of the nastiest turd flavoured sundae we could imagine.

Our managers had ordered us out of the building by that point…our choices were to pack up and go home or we could all hang out together at Bailey’s (a local pool hall and bar just up the way on US 15-501) and watch the coverage on their big screens.

Almost all of us ended up at Bailey’s watching the looped films of the planes striking the Twin Towers and the Pentagon.

I know this may seem absurd but as I’m watching the loops, the aviation geek part of my mind had already identified the planes impacting the Towers as Boeing 767-200s and the plane that hit the Pentagon as a Boeing 757-200. As a lifelong fan of Boeing’s products and having ridden both of those types, I couldn’t help it.

Nor could I ignore the fact that all of the planes involved in the operation were operated by American Airlines and United Airlines. If you hang around the airline industry long enough, you might encounter what most people who don’t work for the airlines might consider rather ghoulish behaviour when an incident occurs.

The almost simultaneous thoughts of “whose airline was it?” followed almost immediately by “what were their seniority numbers?” if it happened to be your airline is almost automatic…you just can’t help yourself. The vast majority of airlines are unionised and there is often only one way to advance your career at that airline: people with higher seniority terminate their employment either willingly through retirement or resignation…or more spectacularly due to a fatal incident.

After a few hours of watching the news, we were all pretty much stunned and the rest of the day was a blur. I eventually made it home safely though it was probably more due to muscle memory knowing the route back to my house and sheer dumb luck than actual skill.

Over the next few days, there wasn’t the usual conversations we’d have during the working day. I’m pretty sure we were thankful that any productivity metrics were set aside by mutual consent for the next week or so.

Working on fixing bugs and writing new features into our software seemed so mundane compared to what our fellow citizens in New York and Washington DC were having to deal with. Our work seemed insignificant compared to the pain and suffering of the families grieving for their loved ones that they had no idea if they’d even receive their remains for a proper burial with the devastation that had been wrought upon us by the terrorists.

After the initial shock wore off, we’d eventually get back to our usual routine…wake up, commute to work, come home.

For a while, there was a very noticeable difference where people started caring more for each other and helping each other out in their time of need.

We still had our political and religious differences but they didn’t seem as important or critical as coming together to support those who had answered the calling of their hearts to try to save as many lives as they could in the midst of this tragedy and horror.

It didn’t take long for the intelligence community to figure out who was behind the attacks and locate their hideout and who was protecting them. Our leaders would take the evidence to the UN…here’s the crime, these are the perps, they’re hiding in Afghanistan, and we want your support to go in and get them if the Taliban refuse to hand them over.

We know how that went: the Taliban essentially told us to kiss their ass and that was a seriously wrong answer on their part. Their regime was deposed and it’d take another ten years but we’d eventually take out most of the senior leadership of al Qaeda including Osama bin Laden himself who was hiding out next to Pakistan’s equivalent of Sandhurst Military Academy.

Fast forward to today and September 11th dawned over a country that is far more polarised and divided than it ever has been in living memory.

We’re so split amongst racial, economic, ethnic, political, and religious lines that it’s very hard to remember it was just a short time ago that we had all come together as one country responding to and rebuilding after the single-worst act of terrorism this country has ever known.

I can’t help but to think that if we don’t wake up from this madness and remember that helping and taking care of each other *IS* the American way that honors the legacy and memory of those who came before us and sacrificed so much for the freedoms we take for granted.

The world we live in now is even more dangerous than the one we lived in just twenty years ago. The Taliban have swept back into power in Afghanistan after our ill-planned and hasty retreat out of the country and no doubt will give aid and comfort to terrorist organisations just like them. Our departure from Iraq wasn’t anywhere near as chaotic but I fear it will be equally disastrous in the long run with the remnants of ISIL and the fact that there really is no effective deterrent to Iran’s ambitions in the region. Sure, we have two carrier groups near there but Tomahawk missiles can only do so much to advance our policies.

It would not shock me if World War III eventually starts in the Middle East when some bad actor nukes Israel and then it’s on like Donkey Kong because the pressure relief valve that was our presence on either side of Iran effectively isolated them and provided quick reaction capabilities to the other hot spots.

What date will we use to commemorate the day those chickens come home to roost?

What date will become synonymous with the infamy that was 9/11?

And what kind of society will that day find when the dawn arrives?

One can dare to dream that we might eventually remember that it’s far better to be the *UNITED* States of America with the emphasis on “united”. Perhaps we’ll remember that we are at our best when we serve the needs of others before tending to our own needs. Maybe we will remember that what divides us is nowhere near as important as that which brings us together…the common cause of an experiment in social and political actions that respect human rights and dignity unlike any this world has ever seen before.

Right now, we’re not doing so hot in any of those realms.

But the one thing Americans have always had in abundance is some sense and measure of *HOPE* for that better future we all dream will become reality.

I firmly believe that when we decide to love one another unconditionally and work hard to embrace our differences rather than fight over them, we can be a better society than we’ve ever dreamed possible.

That’s the lesson of 9/11 we should have learnt and never forgot.