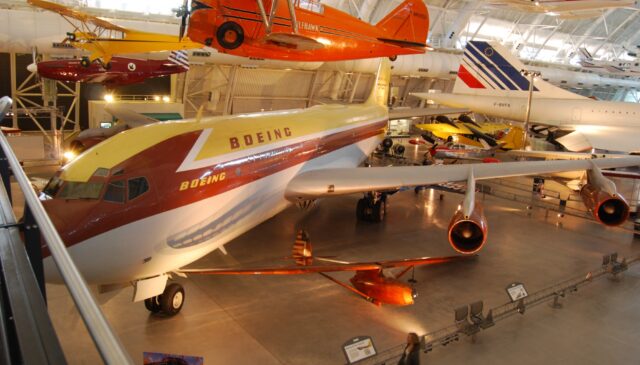 On the way back to Garner from NYC/NJ, I decided to stop for a bit of a break at the newest branch of the Smithsonian Air and Space Museum that is located next to Washington’s Dulles International Airport (IAD).

For me, there were a few stars of the show like the Enola Gay (Boeing B-29 Superfortress that dropped the first atomic bomb on Hiroshima), Lockhee’ds famous SR-71 reconnaissance aircraft 17972 produced at the Skunk Works (fastest air breathing aircraft ever flown and this particular one still holds the speed record from LAX to Dulles!), and the Space Shuttle demonstrator “Enterprise” OV-101 which was used for aerodynamic testing with the shuttle carrier aircraft (a heavily modified Boeing 747-200 which would carry the Space Shuttle on the back).

But the plane I really was looking forward to seeing was Boeing’s legendary 367-80 which was the prototype for the Boeing 707 civilian air transport as well as what would eventually become the KC-135 workhorse for the US Air Force.

And that was with Bill Allen (then CEO of Boeing Airplane Company) watching the 367-80 rolling over like a stunt plane from one of the observer boats on the lake and asking his friend Larry Bell (of Bell Aircraft, maker of helicopters and the first plane to go supersonic, the X-1) for a few of his heart pills.

Larry who had employed Tex in the past told Bill that “Tex just sold your airplane!”

The next Monday, Tex was called into Allen’s office to explain what the hell he was thinking rolling a prototype that was literally worth more than the company. Tex explained that as long as you maintain a constant 1G throughout the roll, the plane never realises it is inverted. Allen chewed on that for a moment before snapping out “you know that…now we know that…don’t you ever do that again!”

There was a famous picture shot out the window during the roll where you can see the engine nacelles are clearly pointing upward at the sky.

The patches from the Dash-80’s many adventures were long since fixed. At one point, she had three different types of engines on the four engine pylons and a fifth engine mounted port-side aft to simulate airflow over the horizontal stabilizers to model what the airflow from the Boeing 727’s outboard engines would do. She has a nice coat of paint and JT3-D turbofans which were not the original JT3-A turbojets she used to flew.

But she’s still a beautiful and legendary aircraft and to be standing next to the plane that spawned so many legends at Boeing is an amazing experience I will never forget.