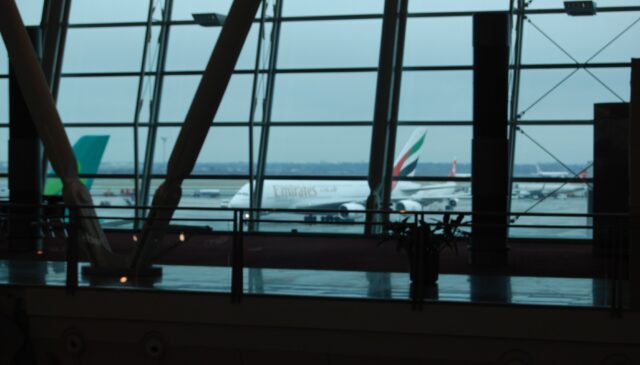 The weather has taken a turn for the dreadful compared to the past few days which have been glorious VFR (visual flight rules). Mind you, it wasn’t quite as depressing as Batman’s Gotham but you can certainly see how Bob Kane was inspired to make his fictional Gotham a dreary place.

As a result, most of today was spent being a bit more subterranean and wandering about on the subway with occasional forays to the surface.

Grand Central Station was well worth visiting for the architecture alone…all of the grand halls and marble remind you of everything that Penn Station…isn’t. Honestly, I could stay a day in Grand Central and probably still not see everything there is to see.

But my ultimate goal was to wander about JFK so I headed south to the Financial District to find the NY Stock Exchange and Ground Zero before heading out to JFK on the A train.

I was hoping to bag a picture of the Airbus A380 superjumbo that we would never have a hope in hell of seeing at RDU. That actually took a bit of doing because a couple of the security guys at JFK’s Terminal 4 weren’t exactly buying my story that I just like to take pictures of airplanes. Sadly, I didn’t have a smartphone or tablet back then where I could actually show them my portfolio of the planes I’ve shot at RDU but I’m thinking that wouldn’t have made a difference. At one point, one of the guards was actually kind of aggressive asking “who are you working for?” as if I were some foreign spy or operative up to no good.

Honestly, this was the only time in the entire trip that I encountered anyone who was at all unfriendly (which given New York City’s reputation would seem surprising except that the truth is that most New Yorkers tend to be helpful to the tourists as long as you understand the rules and don’t be an impediment to them when they want to move somewhere quickly and understand that the slower pace of Southern social niceties are just not a priority in the city).

Anyway, I can certainly understand where the guards were coming from…it’s kind of hard to miss the elephant in the room that was being rebuilt at the footprint of the World Trade Centre towers that had been destroyed less than eight years prior. There was this pervasive feeling that was never explicitly stated during the trip…9/11 definitely was still a fresh memory and wound to the city and even though very few would talk about it (especially to a tourist), when you visit Ground Zero…you understand what you could not understand before seeing it for the first time.

As I was passing by Ground Zero to get to the subway, I encountered one of the workers about to start his shift working on building what would eventually become One World Trade (or “The Freedom Tower” as it is also known). I was looking into the pit and was shocked by just how large and deep the hole was.

I guess he must have seen that look on my face because he came over to see if I was going to be OK or if he’d need to call for the medics. When I recovered my wits, I told him that I was in Chapel Hill when the towers came down and that whilst I understood intellectually at the time what was happening…I really didn’t UNDERSTAND the truly important things until that moment. Those of us who weren’t from the city or in it at the time of the attacks really couldn’t truly understand just how devastating blow it was but in spite of that, the courage of the people of NYC in the face of the appalling destruction and death is something that I will never forget as long as I live.

He never said a word but instead shook my hand for about a minute and his expression said that was the inspiration he needed to pick up his tools and continue his part in rebuilding the tower. And in a way, they aren’t just building a tower…they’re helping heal a massive wound to the city and the country.

Anywho, I ended up getting the picture of the A380 and yes, it is truly an impressively large aircraft. It’s not the best picture because I was standing well away from the guards and had all of five seconds to bring the camera up, aim it out the window to snap a few shots of the A380 that was winding a curved path on the tarmac behind an Aer Lingus A330 and around some other kit in the alley to get to the gate. I also got a nice picture of the Saarinen TWA Flight Centre (Terminal 5) which kind of looks like an alien’s head and a few of the aircraft we wouldn’t see at RDU from the AirTrain which circulates amongst the terminals.