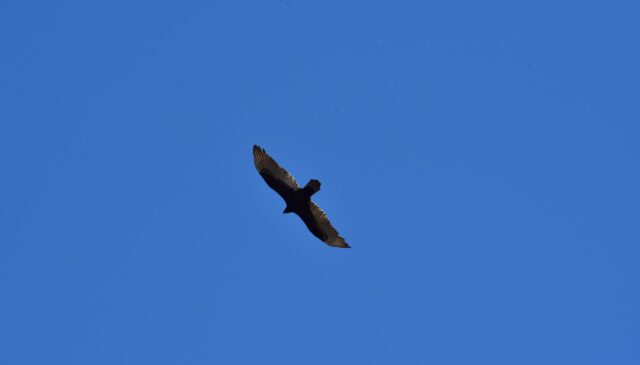 Originally, my eye was caught by the contrails of an Airbus A320 passing overhead but when the hawk decided they wanted to come round and play…well, who am I to refuse?

The tricky bit of these shots is keeping the bird that is randomly flying round visible in the viewfinder and getting the autofocus to lock on properly. In situations like this where the sky is much larger than what you’re shooting, telephoto lenses on the tele end of the focal length scale tend to have a hard time maintaining that lock and start “hunting”.

If you’ve ever been on the wrong end of the focus motor cycling through all of the focal lengths a couple of times, you know what I’m talking about here.

There are a couple of ways to combat this problem:

The D810 autofocus is so good at tracking subjects that I typically just go for the “run-and-gun” approach because I’m used to shooting action shots of fast moving targets. When a zoom lens decides it’s going to do a bit of hunting, I will quickly spin the focal length back to the shortest focal length the lens supports and quickly reacquire the target and then zoom back in on it.

This technique requires a bit of practise and knowing the tendencies of your lenses and which lens is best for your shooting situation. The 300mm f/4 has a habit of being much more prone to focus-hunting (particularly when paired with the 2x teleconverter!) than the 70-200mm f/2.8 but sometimes you just need the longer focal length “reach” as I did in these photos.