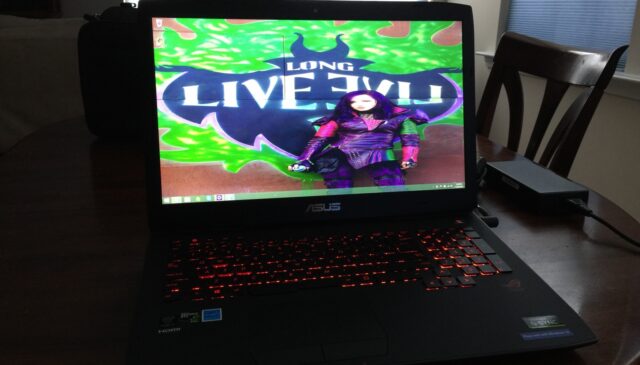 The time of great change is finally upon us with the arrival of a new laptop to replace the nearly six year-old current laptop that is finally starting to show its age.

Laptops by their nature tend to be evil with all of the hardware crammed into an itty bitty space and this new one actually embraces it. The naming scheme of laptops in this house is always for evil characters and thus the name of the new laptop was never in doubt…the most powerful villain of all time: Maleficent!

Whereas the current laptop Callisto struggles with video production with transcodes often taking several hours maxing out the dual core CPU, Maleficent should have no trouble even with 1080p at 60 frames per second when she brings her four cores (eight logical CPUs) and dedicated graphics processing unit to bear! She also sports almost three times the RAM and a speedy solid state disk for the OS and applications and a larger and faster 1TB hard drive for the photos and videos so I don’t have to archive them out to the disk tower as often! 🙂