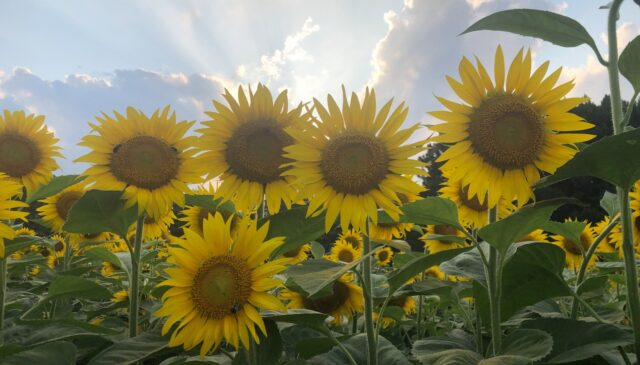 She was interested in getting some pictures of the kids with the sunflowers as a backdrop and taking advantage of the lovely lighting from the setting sun.

As we were between various shots/posing/occasional grumpiness/more posing/SHOOT!, I decided to have a bit of fun with the iPhone’s camera and get some nice shots of the sunflowers backlit by the sun and clouds which were kind enough to provide amazing sunbeams that just took the pictures to the next level.

That field brought back some of my favourite memories of when my father was stationed at Ft Leavenworth KS to do two rigourous programmes in just one year: his Master’s degree and completing the prestigious Army Command and General Staff College.

Either one of those normally takes two years but he had only one so that he could take up his next assignment as an instructor at the Academy of Health Sciences at Ft Sam Houston TX.

Even though George Carlin picks Kansas as one of the four states to be completely fenced in and stocked with various groups of people that society would rather never see again (Kansas gets the violent criminals), it really is a beautiful state.

And there’s no time more beautiful than in the summer when the massive fields of sunflowers are blooming on the prairies. Miles and miles of them visible from the one hill in the entire state of Kansas that was right behind our flat on Fifth Artillery Rd.

No, look a little further past the farm that’s never cultivated veg in its existence because it’s real crop is the Atlas missiles planted in silos on the ground.

There they are…massive numbers of sunflowers swaying in the prairie breezes with yellow petals so bright, they almost seem brighter than the sun itself. Miles upon miles of them…it’s a sight I could watch for hours.

I ought to know…that’s often where you’d find me when I wasn’t at school was on the top of the ridge checking out the prairie or playing in the small canyon between the ridge and our flat.

It was a nice, peaceful spot that was perfect for just hanging out.

That is until the EF-5 tornado heralded by the storm sirens started walking along the horizon. You learned quickly that as long as it’s moving left or right, it’s not coming at YOU.

But no matter how nasty the weather, the sunflowers always seemed to survive the storms intact and just waiting for the sun to come back and give them their due.

That year at Ft Leavenworth had many special memories but truth be told, the sunflowers were probably the best memory of them all. 🙂